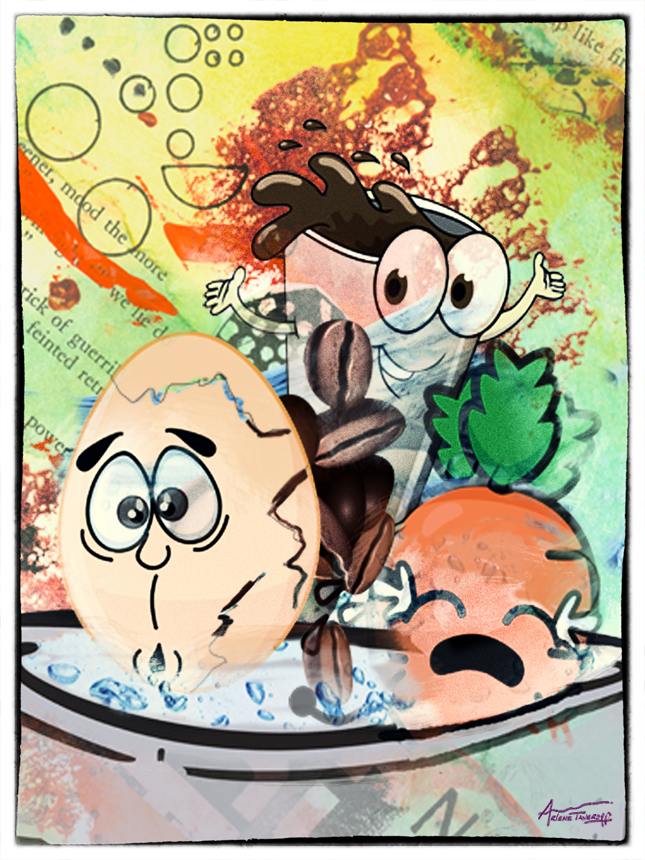 For many, retirement can be challenging. It’s like a wall that suddenly appears in front of you and blocks the path you’ve been walking along for so long. How do you react? What now?

Read this short story and find out which type you are!

The carrot, the egg, and coffee bean were sitting on the kitchen counter, about to face a very difficult challenge: one that meant that life as they knew it was about to change. They were about to face the dreaded pot of boiling water!

The carrot had always been strong, vibrant, and colorful. After facing and trying to resist the boiling water, the carrot came out dull, soft, and limp. The water was clearly the victor.

The egg was confident in the hard shell it had to protect its inner liquid nature, its real self. Upon facing the adversity of the water, however, the outer shell quickly cracked. Its inner self became hard, different, no longer fluid and liquid. The egg’s basic nature had been altered by the challenge of the water. Yet the water remained unchanged.

So if the water is retirement, which are you – the carrot who goes limp, the egg who cracks and hardens, or the coffee, who embraces change and elevates both itself and its surroundings?

Maybe you’d love to be that coffee bean but just aren’t there yet. Sometimes it helps to get centered and find your passion.

Or do you love inspirational talks?
Check out YouTube Channels like Get Inspired Talks or Motivation Hub. Ted Talks can also stir up some inspiration.

Do you like to read?
Find a biography of one of your heroes. Or check out books like Thriving Through Uncertainty by Tama Kieves, Becoming a Life Change Artist by Fred Mandell and Kathleen Jordan, or School of Greatness by Lewis Howes.

We use cookies on our website to give you the most relevant experience by remembering your preferences and repeat visits. By clicking “Accept All”, you consent to the use of ALL the cookies. However, you may visit "Cookie Settings" to provide a controlled consent.
Cookie SettingsAccept All
Manage consent

This website uses cookies to improve your experience while you navigate through the website. Out of these, the cookies that are categorized as necessary are stored on your browser as they are essential for the working of basic functionalities of the website. We also use third-party cookies that help us analyze and understand how you use this website. These cookies will be stored in your browser only with your consent. You also have the option to opt-out of these cookies. But opting out of some of these cookies may affect your browsing experience.
Necessary Always Enabled
Necessary cookies are absolutely essential for the website to function properly. This category only includes cookies that ensures basic functionalities and security features of the website. These cookies do not store any personal information.
Non-necessary
Any cookies that may not be particularly necessary for the website to function and is used specifically to collect user personal data via analytics, ads, other embedded contents are termed as non-necessary cookies. It is mandatory to procure user consent prior to running these cookies on your website.
SAVE & ACCEPT